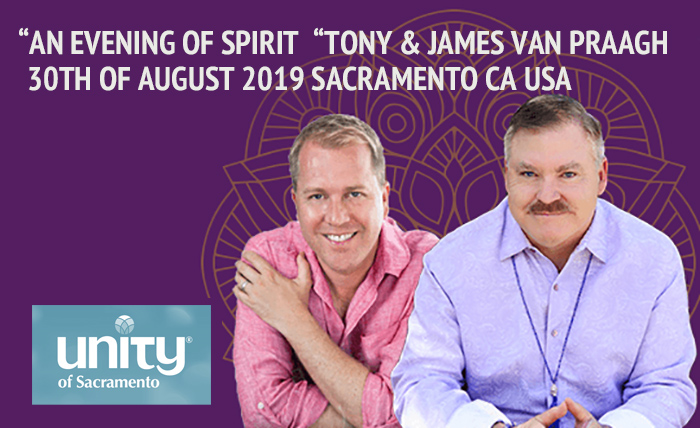 Experience a night of international mediumship with two of the world’s most renowned mediums at the Unity of Sacramento on Friday, August 30! James Van Praagh joins forces with Tony Stockwell to

Experience a night of international mediumship with two of the world’s most renowned mediums at the Unity of Sacramento on Friday, August 30! James Van Praagh joins forces with Tony Stockwell to communicate with the Spirit World, transmitting information and messages to randomly selected audience members.

Join James and Tony for a life changing evening that will forever change your views on life – and death!

VIP Tickets are available. VIPs will receive preferred seating, and will attend a post show meet and greet where James and Tony will be available to sign books and post for photos!

James Van Praagh is recognized throughout the world for his talent, and has frequently been identified as one of the most accurate spiritual mediums in existence today. A #1 New York Times bestselling author, he has written over a dozen spiritual classics and appeared on Oprah, Dr. Phil, Larry King Live, 20/20, The View, The Today Show, Chelsea Lately, and more!

Tony Stockwell has also amassed an extensive background of mediumship, demonstrating his art for over 25 years. Known internationally for his teachings and television appearances, he has guest starred on The 6ixth Sense, Most Haunted Live 4, and The Mystery of Body 115, as well as many others. He has also produced a variety of his own television mini-series, such as ‘The Psychic Detective’, “Street Psychic”, and “Psychic School”. Additionally, he is a critically acclaimed author of numerous best-selling books, including The Psychic Case Files and Walking with Angels.